This is mostly going to be a pic and video/sound blog this time, with just little notes between.

I arrived in Philadelphia and snapped a couple random walking shots. 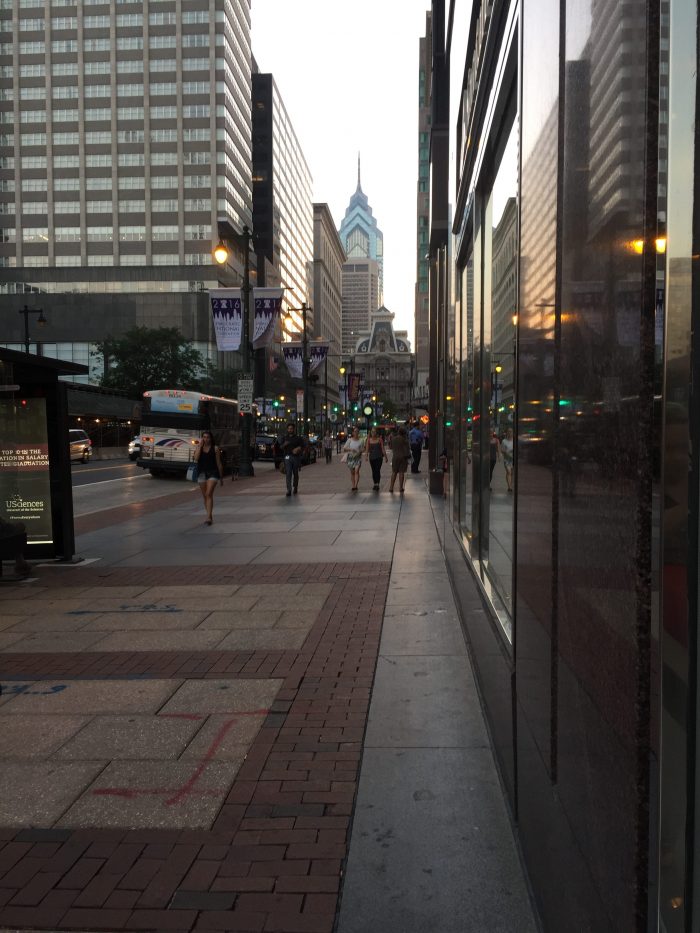 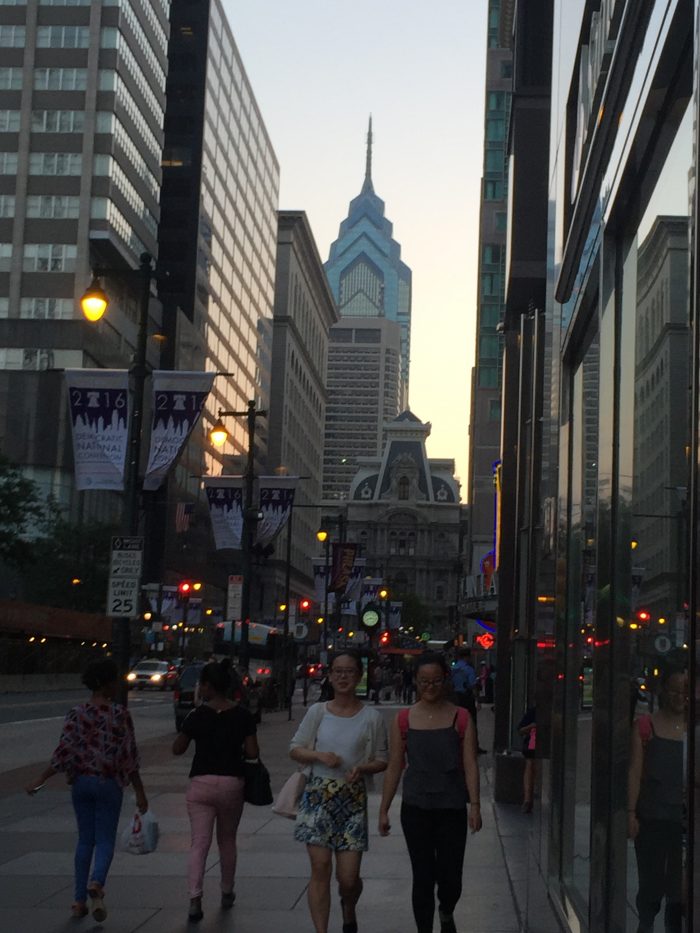 We all hung about as folks arrived. I had screwed up my GPS address and had to hunt some for the house. Lots of hugs and hanging out on the front porch gabbing or inside gabbing and playing games or inappropriate YouTube funnies.

This  included a new game introduced to me:  “Five Clicks to Hitler”.  For those also unfamiliar, you start on some random or chosen odd Wikipedia page and then see if using the links in the pages if you can get to Hitler within 5 clicks or less.   It turned out quite cute, I had a good time with folks joking and laughing around me while they played.

Puppies was used once as the start page, also Dust Bunny. 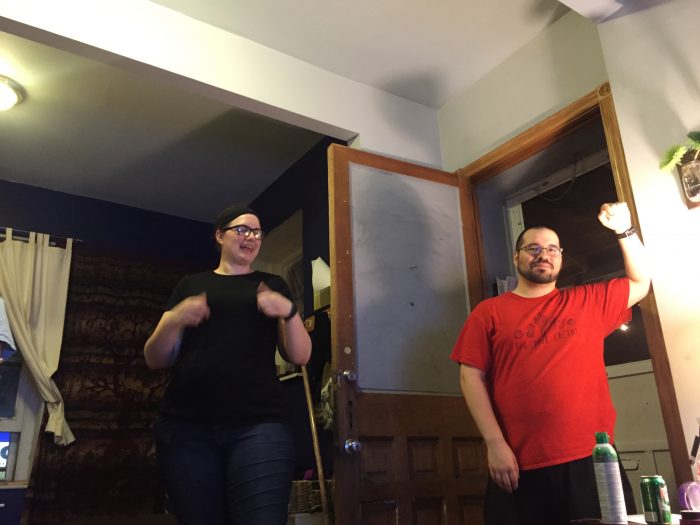 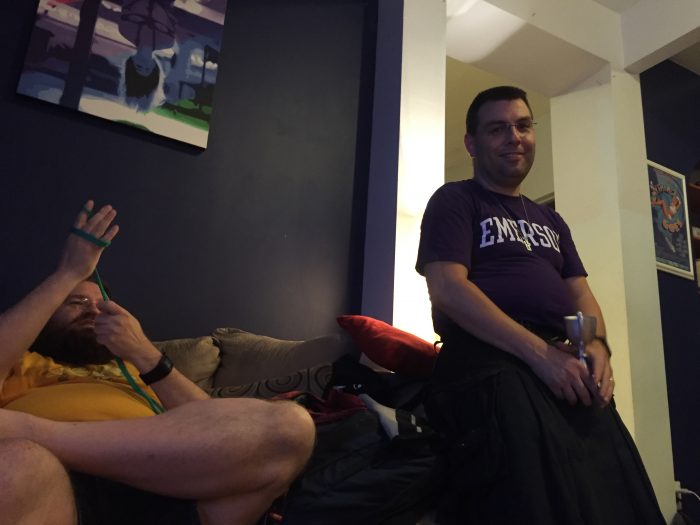 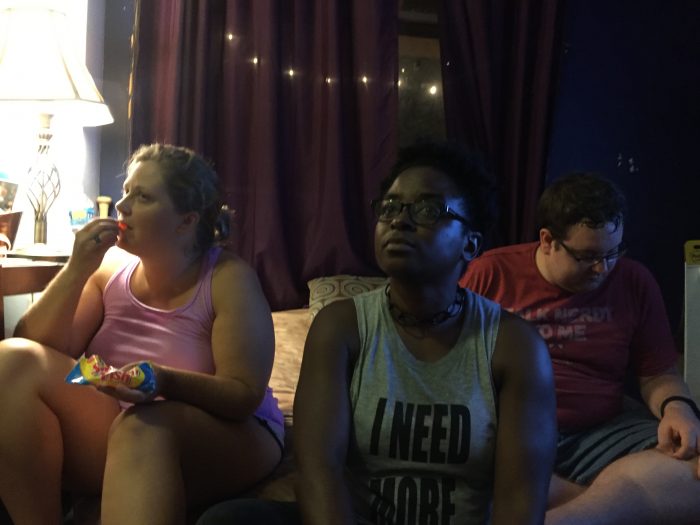 During this, some of us helped Grant get stuff out of his car and when we were settled back at the house with everyone I received some Delta Mail. 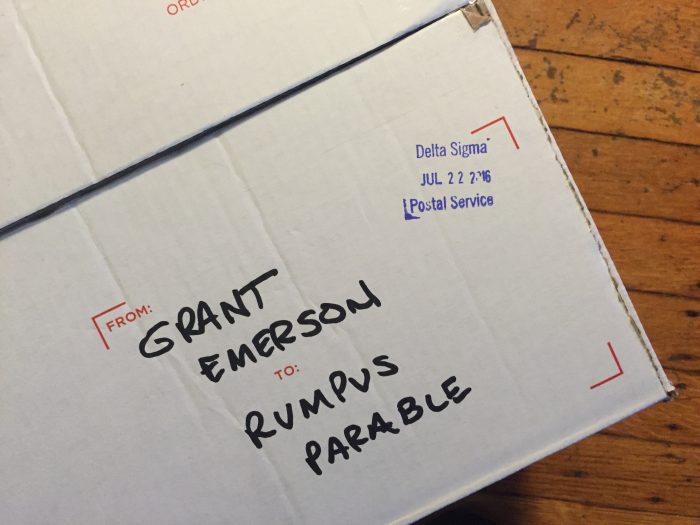 Folks eventually, of course, needed sustenance and so the discussion that is always a pain started… there were around 11-14 of us depending on what hour it was over the weekend. Finally, pizza, the easiest almost always, was decided and Boon was left to the ordering with input from others of us while hanging on the porch in the pretty dark.

She suggested and we all nodded at the idea of two 2′ wide pizzas (one cheese, one pepperoni) and a little personal one for me. 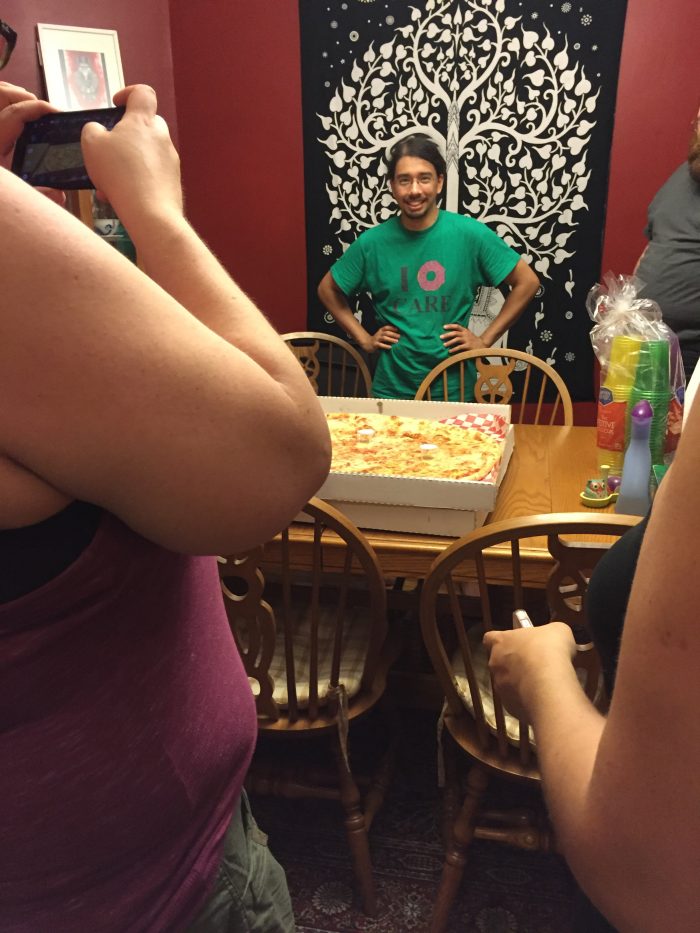 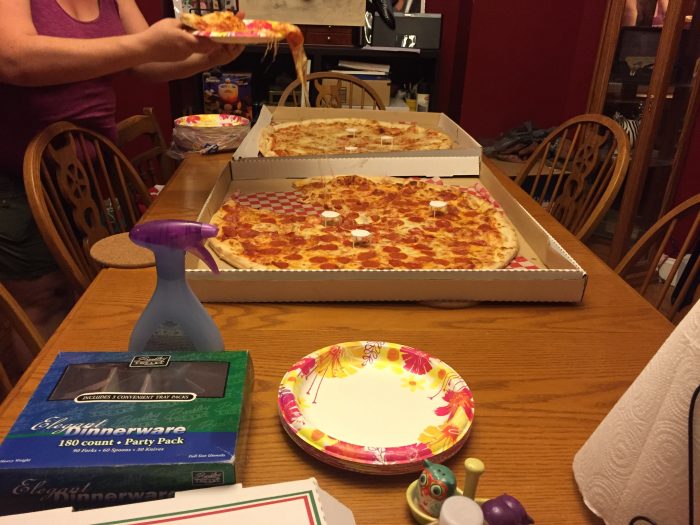 This was a chaos draft competition, see name of post, and most folks didn’t know or remember how to play.  Those who had brought massive amounts of cards and we who were gonna play pitched in on the cost of the extra decks needed for us.

Grant decided to give a beginner class casually in the livingroom and opened his box. 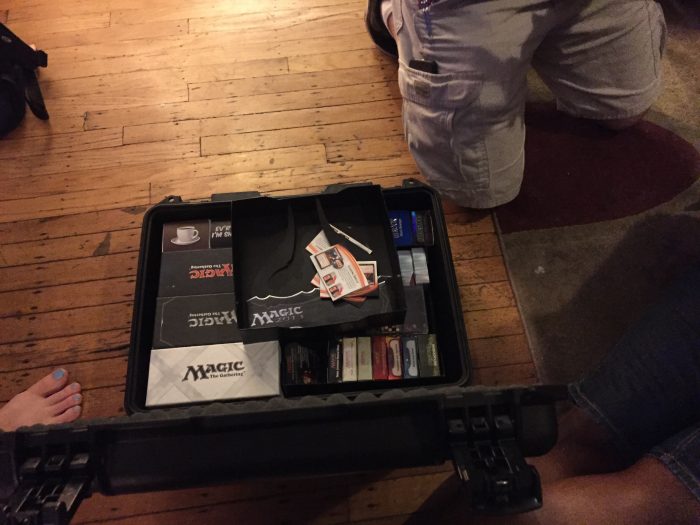 Inside were also dice I hadn’t seen in a long time. 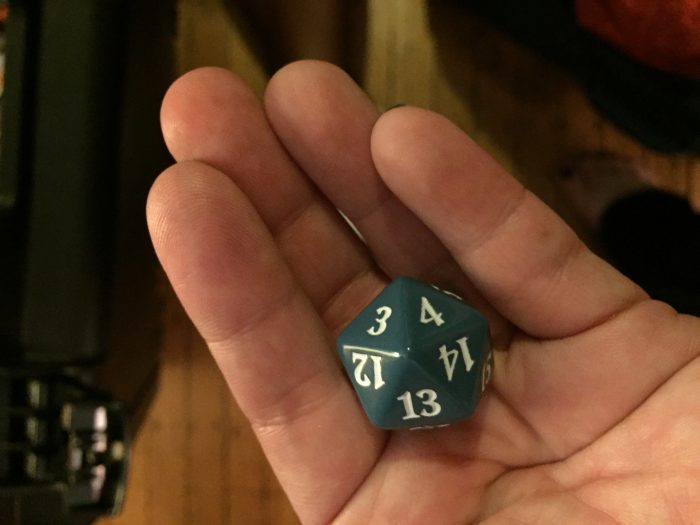 A card I liked. 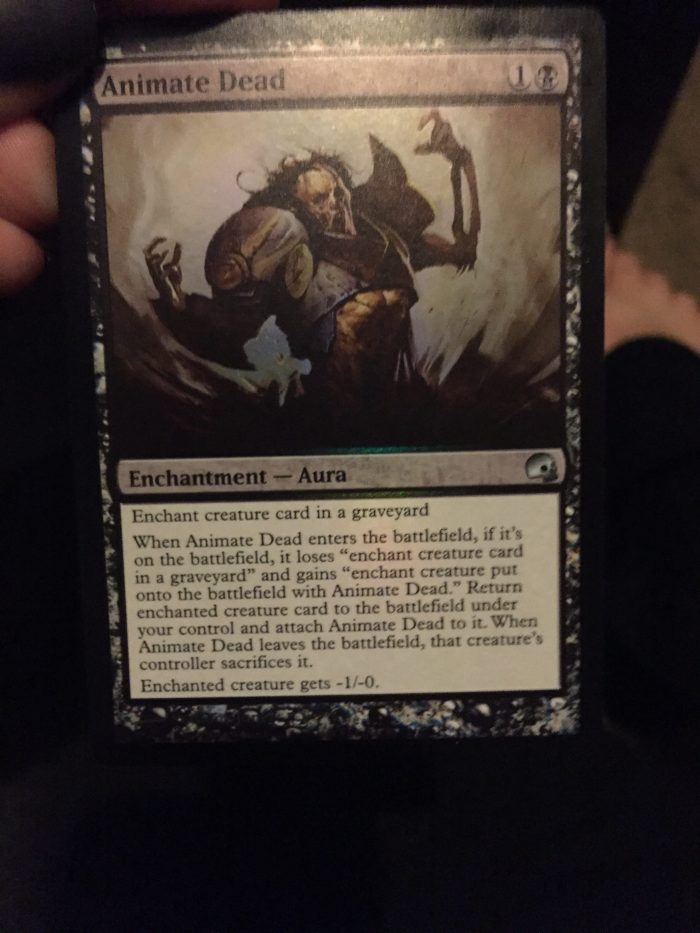 At one point there was  a joke about how wanting to see the keywords of game done next morning with Grant doing it on one of those old school flip-paper-over class thing… Grant points and says “look over there in the corner”.    Is post it brand paper flip paper thing . Didn’t actually, just shown by game with Kanin.

It’s the actual tournament day.  A lot of us still don’t really know what we’re doing, like me for instance, but folks are ready to go… or just have fun BS’ing.

Kate, the event’s coordinator on the Board, presented this trophy to be fought for.  It was pretty nice and cute. 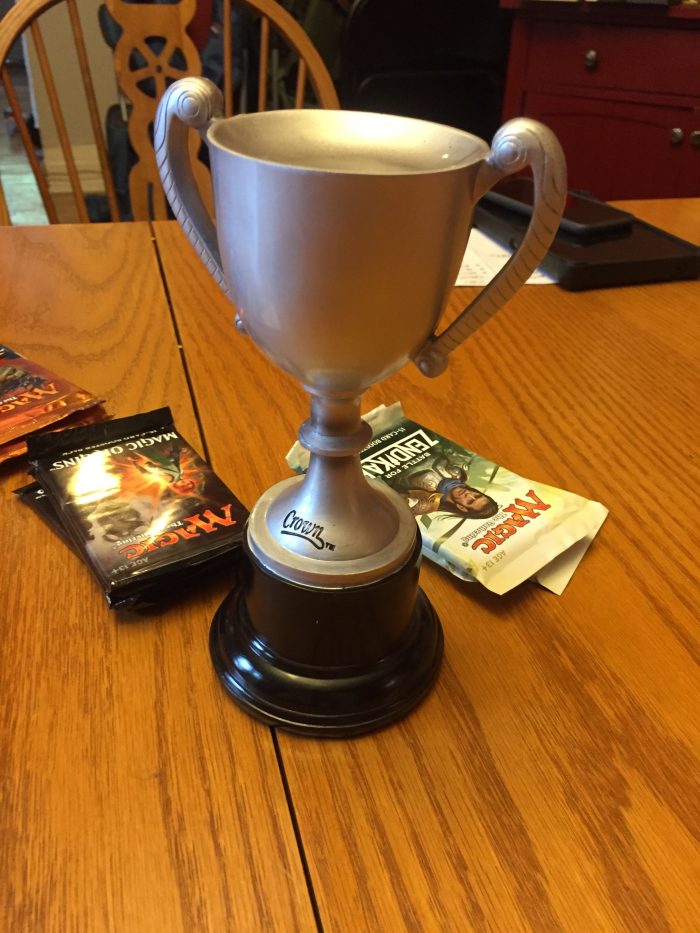 We started the chaos draft itself.  It quickly became an awful trial. 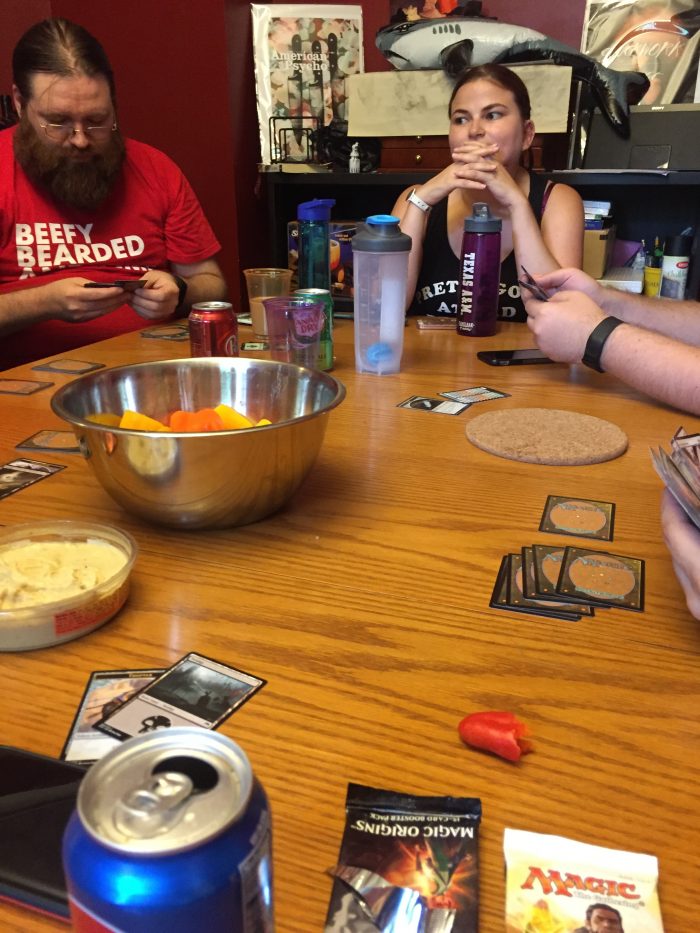 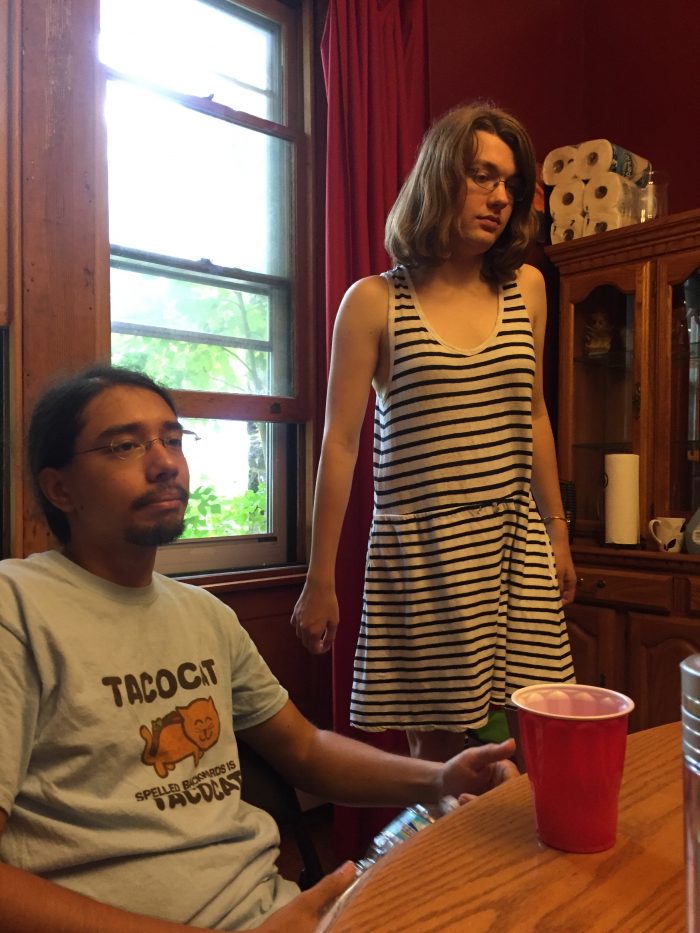 Ickily the burnt area of my hand was accidentally scratched unconsciously and skin came off with lymphing skin there… As in, top layer is sloughing without lower fully healed. It was very minor, but eww.

As the other part of the title’s name, Kate arranged for Tacos on game day!  To include fake meat for the vegan and vegetarians!  They were messy, as tacos always are, and delicious and fun.

Somewhere along the day things like bacon grease for lube, a game of “Who’s In My Mouth”, creating a Viagra Larry Pledge act option, and regarding voting on something Grant brought in a Stripes quote about how you can’t vote due to a felony.

Here is a truly terrible panorama shot with my iPhone taken of the room at one point during play:

The bathroom had hilarious signs made in front of the toilet and on the back of the door that I took a snap of on the last day. 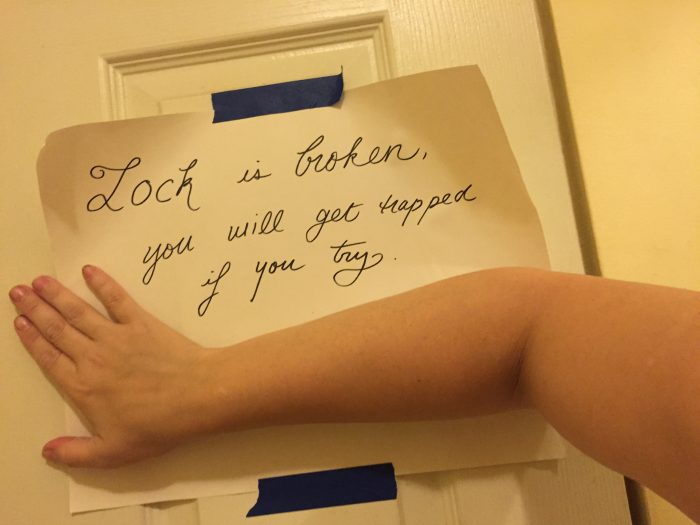 Sunday, the 24th, we all did this and that and hugs and saying good bye and stuff.

There is tons of stuff not in here that happened and was said and I got pictures of but it’s too much to try and cover and also some pics I’m not sure a couple of silly folks really want out there lol.

Let’s leave it as an awesome time that Kate managed with The Venue owners for Deltas and bids and all.